PPS at the British Transplant Games

PPS at the British Transplant Games

Read all about the British Transplant Games and how Alison and her team used PPS to care for the athletes and manage the games.

The British Transplant Games is a multi-sport annual event involving approx 1000 athletes aged 2 – 82 from around the UK, all of whom have been given the Gift of Life through organ donation. It has been running for the past 40 years and aims to encourage those who have had a life-saving transplant to live a healthy, active and normal life, but also to show the public the benefits of organ donation and encourage them to sign on to the Organ Donor Register. The level of competition can be very high, the men’s 100m this year was run in 11.4 seconds! But it also encourages people at all levels of skill and ability to come together and compete in a supportive environment where all have faced the same medical trauma and live with the ongoing effects of anti-rejection medication. Events cover a wide spectrum of sports: Track & Field Athletics, Swimming, Racquets Sports, Volleyball, 5-a-side football, Basketball, Cycling, Golf, Bowling, Darts, and children’s events. The simple criterion for these Games is that if you are NOT on banned drugs then you can’t compete!

I have been involved providing Therapy support to the Games since 2001, building from a single Physio with a couch to a team of 25 volunteer Physios, Sports Therapists and Sports Masseurs providing support, treatment and massage to the competitors. We also involve both Physio and Sports Therapy students giving hands-on experience and mentoring. I also lead the Physio team supporting the British Team at the World Transplant Games which occurs bi-annually and involves around 50 countries. As the owner of a private practice in Kendal, I was converted to Practice software and electronic notes a few years ago and after having trialled a number of options found that PPS from Rushcliff was best suited to us. In a Practice environment, it proved to be an excellent package and so when it came to evaluating possibilities for electronic notes in an Event environment it seemed natural to try and involve PPS in this as well.

Transplant Sport is a very poorly funded charity and does not receive government support in the same way that disability sport does, and so over the years, we have relied on a lot of goodwill and volunteering to provide the level of care and treatment required at this kind of event. Throughout the year there are a number of smaller satellite sports events which we also try to provide Therapy for and one of the big problems has been the difficulty with continuity of care for people who are seen at different events and whose paper notes are stored under lock and key elsewhere! Another more serious issue had been the security of such notes during a multi-venue event and with the new GDPR regulations, I felt that this was becoming an untenable situation. After presenting the dilemma to Tabitha I was delighted when PPS offered to provide a licence to us all year round for which the charity would pay the monthly fee, but that we would then be provided with multiple licences for the period of the Games (1 week for British and 2 weeks for World) for free. What a deal! This would mean access to people’s notes throughout the year at whichever event we were working and continuity of care for those people being seen by different Therapists at different venues.

For many of the volunteers, electronic notes would be a completely new experience and there was much trepidation amongst my volunteers as to how this would work. PPS were good enough to provide my volunteers with access to their user webinars for free – another great perk. I also prepared detailed user guidelines for basic use and once they had started the process of inputting most of them found it very easy and intuitive. The initial set-up of the system took some time and it was difficult to know how to set up some of the Diagnostic codes and Outcomes to be most meaningful in terms of future analysis and also generic enough to be understood across the various Therapy disciplines. My previous familiarity with PPS was a distinct advantage for this but it was still difficult to anticipate how this would work in a very frenetic event environment. With help and support from others who had used PPS before and the younger more “techy” volunteers, people really did embrace it with good grace, if not complete enthusiasm! The overall feeling was that it wasn’t as bad as they had anticipated and all agreed that it was something worth refining and pursuing for future events and is the way forward in the long term.

At the larger and/or outside events during the Games such as the mini-marathon and donor run where we see approx 150 people in about 2 hours, or the football competition, there really isn’t any option but to write down patient details on paper forms and then input them later. As most of these tend to be massage anyway, it is not a great problem to put this info in later on, and where assessment and treatment were needed the therapist used their tablet or phones to input this information. This did produce some difficulties either due to signal strength in an external environment, or difficulties with small screen use on phones. The main problem we discovered is that as soon as your fingers are greasy with either sweat or massage cream/oil it is impossible to use a touchscreen. This is not easily overcome and something we will have to give consideration to when advising on what people should use in the future. It was also difficult at the athletics event to have sufficient time to input info when faced with a queue of people on a tight competition schedule. More people, more laptops and some admin staff could be part of the solution!

The British Games this year was the largest ever, and so the demands on Physio the highest we have had. On Sunday at the athletics event alone we carried out 186 treatment episodes, many of which were massage and strapping, but all of which had to be input into the system. How we manage this in the future is still to be determined but thankfully we had good internet signal in our treatment room and volunteers who were happy to sit and input data for periods both during and after the competition.

Overall I was delighted by the way in which all the volunteers worked with the system and used it as best they could. My main aim this time was just to get people using it, get competitors entered on the system and not lose any of my precious volunteers due to frustration or resistance to change. All those aims were fulfilled and indeed the enthusiasm amongst some was much higher than I (or they) expected. This was very much a trial run to see how it would work with a view to making this a permanent feature for the British Games but also to provide a workable platform for when the UK hosts the World Transplant Games in 2019 in Newcastle/Gateshead. As I will be heading up the Physio provision for this, and having seen the electronic note keeping at the World and Para Athletic Championships last year, I am committed to providing the most professional service that we can and electronic notes is part of this. In my enthusiasm for this project, I have also had enquiries from the Drs as to how they might be able to use a similar system and even integrate with us! Progress indeed! Rushcliff has already offered to support us further with this development of an integrated platform and training for the World Games event.

I can only thank Rushcliff, and in particular Tabitha, for their support with this project, and look forward to working together in the future. 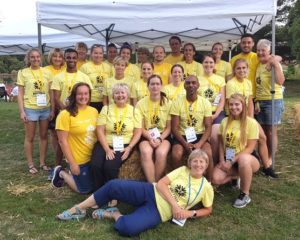 For further information on Transplant Sport and the Games the following links may be helpful: